“No temptation has overtaken you except what is common to mankind.  And God is faithful; He will not let you be tempted beyond what you can bear.  But when you are tempted, He will also provide a way out so that you can endure it.”

We must look deeper into the meaning of this verse in order to interpret it accurately and understand it in context of our situations.  Online author Lyn Dove does a wonderful job of helping us interpret this passage, not only correctly, but in a way that clarifies how our battle with temptation is often handicapped by the toxic shame in our lives:

The misinterpretation of that verse makes people question God and decry the unfairness of life.  Why does God allow me to be tempted?  He promised we would never face more than we can bear!  This perspective completely misses the meaning and message of that Bible verse because we have completely misinterpreted it!

The reader must consider this scripture in proper context to glean its full meaning.  Paul, in 1 Corinthians 10 (NIV), is warning the church, using Israel’s past history to prove his point: That they will face all manner of temptations, but as long as they anchor themselves to God, He will give them the spiritual strength to handle whatever they may face.  God will not allow any temptation to come their way that they are unable to resist.  The entire passage is about temptation and the fact that people fall into temptation when they are being disobedient.  Verse 12 warns: “So, if you think you are standing firm, be careful that you don’t fall!

Sin is insidious.  When people are not following God, when they insist on going their own way and not obeying God, sin, disguised as temptation, will lure them in.  Verse 14 says the solution to being tempted is to “flee,” but if we ignore that advice and instead succumb to temptation, God will, in His mercy, help us by providing a way out.  He will ask us to repent (turn from the sin), to be restored to a right relationship with Him first.  Leaning on Him, we can endure the consequences that follow as a result of our disobedience.  He won’t remove the consequences, but He will give us the strength we need to handle them.

The promise is not that God won’t let bad things happen, but when they do happen, we can trust that God is bigger than any problem, trial, or temptation we may go through in life. 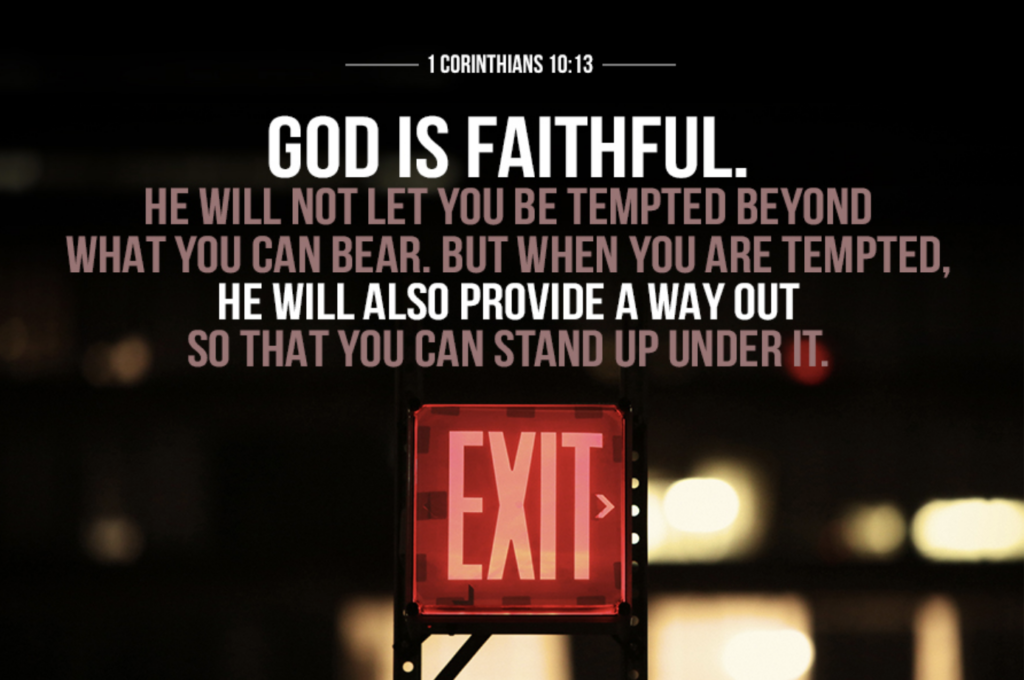 Even when I knew that anchoring myself in God would give me the spiritual strength to withstand whatever temptation life may throw at me, I was often complacent about doing what was necessary for that to happen.  I wish I could tell you why.  Maybe there was something exhilarating about being vulnerable to temptation, because it allowed me to continue in the earthly pleasure it had provided since I was twelve years old.

I was first exposed to pornography at the vulnerable age of twelve.  Long before the internet, it was in the form of magazines.  Lots of them.  I never even needed to purchase or own a single one.  Several young guys in my life had drawers full of them.  Mine for the taking.

At twelve, I was just curious.  Those were things I had never seen before.  No acting out.  Just a growing curiosity.

What began as novelty turned into frequent acting out – call it sin, regardless my young age.  At some point (I can’t even tell you when it was), my occasional habit crossed the line into becoming an addiction – a pattern I was unable to stop.  I’m not really sure what I was addicted to.  Pornography?  Naked women?  The rush it gave me?  The emotional and physical release I experienced?  The vicarious feeling of being wanted, pursued, or accepted?   Or could it have been something much deeper?

I took this self-destructive secret with me from junior high to high school to college to marriage to young adulthood.  Saying and doing all the right things on the outside.  Hurting, lonely, and ashamed on the inside.  My brokenness had gone from a byproduct of choices my parents had made, to now, a cycle of shame I repeatedly imposed upon myself.  The sin had gone from initially being theirs to now being fully mine.

Understanding Our Inborn Nature May 26th, 2022

From Prominent To Superficial May 22nd, 2022